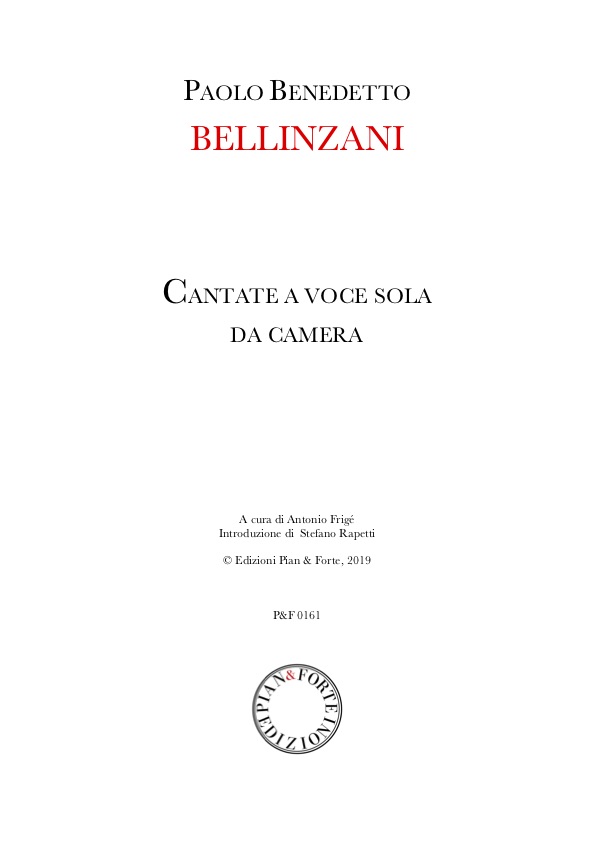 Of these 12 chamber cantatas for soprano and bass (the original manuscript is preserved in the Bibliothèque nationale de France in Paris) nothing is known of the date or place of composition. Such missing information is not uncommon for the musical output of Bellinzani, who was a prolific and versatile author in spite of his small number of printed publications.
Of his life, we know that he was born in Mantova or Ferrara around 1690 and was ordained as a priest in 1717. He worked as choirmaster in different Italian cathedrals, from Udine to Pesaro (where he took on duties as Censore of the Accademici Risorti; he was also an honorary accademic in Bologna, admitted without an apprenticeship), in Urbino and finally in Recanati where he died “paralysed on the right side" in 1757.
In the span of 40 years of activity, Bellinzani produced, other than a multitude of liturgical compositions, 12 sonatas and la Follia for flute solo with bass (a large part of which was discovered in the last ten years), 12 church sonatas for two violins with bass, numerous masses, two oratorios, madrigals for 2, 3, 4 and 5 voices, psalms for 2 and 4 voices entitled "Stramberie alla moderna" and 12 chamber duets.
The 12 chamber sonatas don't diverge from the coherent aesthetic panorama of the Bellinzanian production, where the composer manages to create his own artistic and well-defined signature without ever falling into repetitiveness or reusing his own material. His style is characterized--using his own words--by a sense of "studied simplicity", where the sobriety of the melodic lines has no fear of a rich use of ornaments (his contemporaries criticized him for his boldness) and his dramatic waves, underlining his knowledgeable use of dissonance. Bellinzani himself declared his admiration for Arcangelo Corelli and Benedetto Marcello, to whom he aspired while retaining his own originality. Also in this work we can recognise the stylistic ideal of a musical symbiosis between senses and reason, acquired on the condition that “those who want this—the music—explain their judgement, have the talent willing to be moved by their sweet violence”