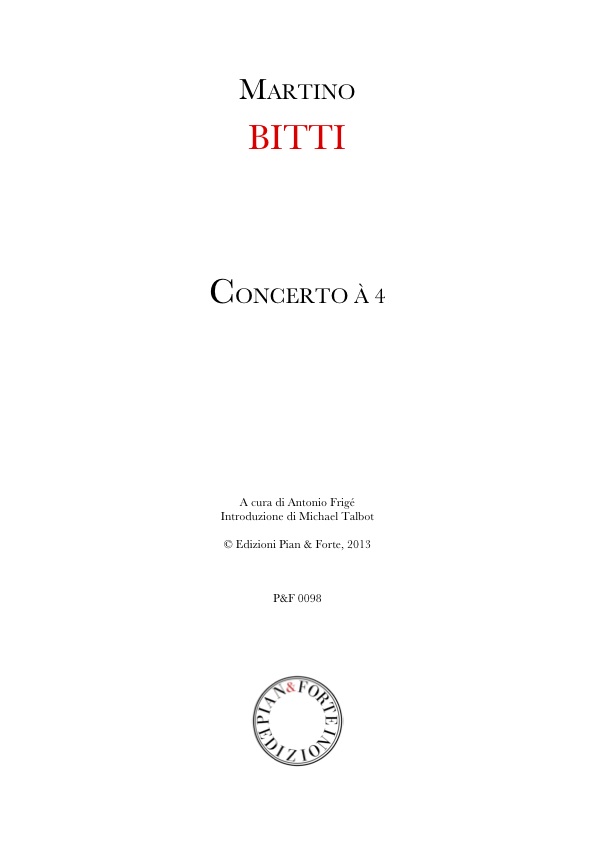 Martino Bitti was born in 1665 or 1666 in Genoa. Joining the musicians at the court of Tuscany under Cosimo III in 1685, he rapidly rose to become primo violino and leader of the orchestra, and a favourite of the music-loving Grand Prince Ferdinando de’ Medici. Unlike his Florentine contemporary Francesco Maria Veracini, Bitti, commonly known by his given name (or diminutive variants of it), travelled little outside Tuscany. He was a sought-after teacher of the violin in Florence, and was universally recognized as the outstanding musician residing there. He retired on a court pension in 1726 and died in 1743...

Bitti’s lone concerto is strikingly modern for a composer older even than Torelli. Mo- reover, it abandons Roman structural models to place itself firmly in the Bolognese (or, more broadly, north-eastern) camp, although its luxuriant style of counterpoint, featuring a particularly active and adven- turous viola part, remains authentically Roman. The Dresden manuscript containing it is a full score copied on to four folios. The paper, in the usual oblong quarto format, with ten pre-ruled staves per page, measures approximately 22 x 28 cm. The hand is different from those encountered in Sonatas 3-6: it may be that of a professional Italian copyist, perhaps a colleague of A, B and C, or it could even be that of the composer himself. On f.1r we find the heading “Concerto à 4” without mention of a composer. Here, “à 4” refers to the scoring as it becomes when no distinction is made between the principal first violin part (i.e., the solo part) and the ordinary first violin part; most other composers of the time preferred, however, to use “a 5” as the appropriate descrip- tion for this type of scoring.
To remedy the absence of a composer’s name, another hand has written “MB” in the top right-hand corner of the opening page. This hand may well be Pisendel’s, although the two capital letters pro- vide insufficient evidence for a confident assertion. The strong case for Bitti’s authorship rests, rather, on the absence of any obvious alternative composer with the same initials, on his proven connection with Pisendel, and on the clear stylistic affinity with his authenticated music, with which it shares the qualities of good counterpoint, clear form and classic poise.
Each system comprises five staves, which permits two systems per page. Exceptionally, the first movement, in which the principal and first violins play throughout in unison, employs systems of only four staves, with the result that the two lowest staves on the opening page are left blank. Since the parts are not named individually, they have to be inferred from the clefs, which are treble clefs for the two or three violin parts, the alto clef for the viola and the bass clef for the basso continuo. At the start of the second movement, where a five-stave system appears for the first time, the highest staff is headed “P.mo solo”...